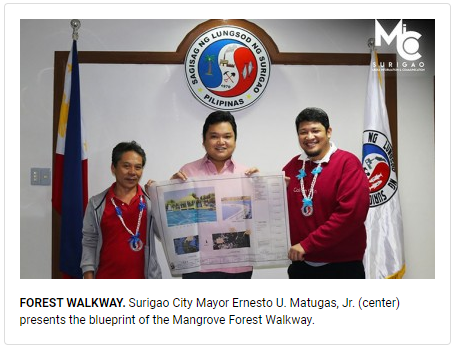 Matugas said the Tourism Infrastructure and Enterprise Zone Authority (TIEZA) has already approved the appropriation of PHP16,850,000 to fund the construction of the said tourism project.

Matugas said the project is part of the overall efforts of the city government to boost the tourism industry in the city.

The project, located in Barangay Day-asan here, will allow foreign and local tourists to see the thriving mangroves that serve as a sanctuary of the rich marine resources in the city, he said.

It will also educate visitors on the importance of mangroves and the vital roles they play in the biodiversity of the marine resources in Surigao City, the mayor added.

“The construction will start early next year and expect that this will be completed in 90 to 120 calendar days,” he said.

He said programs and project that will help boost the tourism industry in Surigao City is among the priorities of new city administration.

In a separate interview on Friday, Surigao City Vice Mayor Ernesto T. Matugas, Sr. welcomed the approval of the budget for the Mangrove Forest Walkway project.

Vice Mayor Matugas said the conceptualization and the submission of the proposal of the project were done in the final months of his term as mayor of Surigao City. (PNA)